Restaurants are facing staff shortages while striving to provide good customer service, and new innovative technology can help ease those burdens. Startups at the Florida-Israel Business Accelerator event introduced their products to in-room restaurants and guests during the “The Future of the Restaurant Is Here” event held inside the Brian Glazer Family JCC’s Tampa campus. […]

Israeli tech startups want to carry Tampa Bay restaurants into the future. Driving the news: Two businesses pitched server-assisting robots to restaurateurs and business influencers at a Florida-Israel Business Accelerator dinner Tuesday night. The star of the show: Bear Robotics’ Servi, a sleek bot on wheels that served appetizers off its carrying trays. Servi is […]

Jordan Johnson, founder and CEO of Naked Farmer, and Brick Street Farms Account Manager Briant Wildes were among those highlighting innovations in the local food scene during Tuesday’s “Restaurant of the Future is Here” event in Tampa. The talk was hosted by the Florida-Israel Business Accelerator, at the Bryan Glazer Family JCC campus. Read the […]

Restaurateurs and hoteliers can get a more detailed glimpse of their future on Aug. 30, when the Florida-Israel Business Accelerator presents its latest Connection to Innovation session. Titled, “The Restaurant of the Future is Here”. One of the featured speakers will be Daniel Meretsky, vice president and head of technology at Tampa-based Ciccio Restaurant Group, […]

Two “phantoms” named Helga and Zohar will ride in other Orion seats. These mannequin torsos are made of materials that mimic the soft tissue, organs and bones of a woman. The two torsos have more than 5,600 sensors and 34 radiation detectors to measure how much radiation exposure occurs during the mission.The mannequins are part […]

Diagnostic Robotics, which has developed an artificial intelligence system for clinical prediction, has announced that it has raised $45 million. Diagnostic Robotics was founded by Yonatan Amir, together with Dr. Kira Radinsky, who became famous when, at a very young age, she sold artificial intelligence-driven prediction company SalesPredict to eBay. A third founder is Prof. […] Over a recent Zoom interview, Miniati and Bachur-Phillips talked about the group’s evolution and future goals. (This conversation has been edited for length and clarity.)Do a lot of states have a direct-to-Israel startup pipeline?Bachur-Phillips: I think it exists in other states, other cities, and for a good reason, because Israel is such a source of […]

The Alan B. Levan | NSU Broward Center of Innovation is collaborating with the Florida-Israel Business Accelerator to help the Israeli organizations establish a presence within the Florida market. Israeli companies and startups working with FIBA will have access to the Levan Center’s facilities and programs while in South Florida.https://www.bizjournals.com/southflorida/news/2022/06/22/news-in-brief-for-the-week-of-june-24.htmlEnvatoMore Posts

Our goal is to help Israeli companies establish a presence in Florida. Some companies prefer Tampa Bay, others prefer the Space Coast, and for others Broward County is the right spot. By partnering with the ambitious team at the Levan Center of Innovation, we can support these companies on both coasts of Florida.New partnership to […] 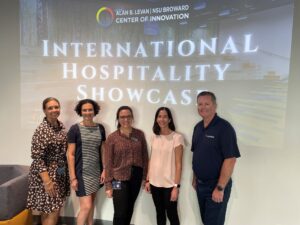 Tampa Florida (June 23, 2022) — The Florida-Israel Business Accelerator (FIBA) is pleased to announce its new strategic collaboration with The Alan B. Levan | NSU Broward Center of Innovation (Levan Center), an industry magnet for talent and innovation in technology. FIBA will be expanding its operations into South Florida by becoming a member of […]